Constructed at the centre of this enormous capital in Roria, Anthian City - Shopping District is a central hub that connects to all other districts in Anthian City. Many shops here sell unique items, for example, Poké Ball Emporium is the place to go for special Poké Balls, while the Stone Shop sells expensive Gems, evolutionary stones, and Mega Stones. Some of the main developers open shops in this area as well, such as Hero's Hoverboards and Rorian Braviary.

Providing a much greater variety than Poké Marts, this is the place to buy special and unique Poké Balls. This shop also features 18 custom-made Elemental Balls, one for each type. Rival Tess leads Jake and the player here upon arriving in the Shopping District. She also talks to Uncle Gerald — a friend of Tess' father, to find more information on the villainous Team Eclipse.

There is a locked door under this shop. Once the player obtains Soaring Badge from Anthian Gym, Uncle Gerald gives the player Basement Key to open that door, allowing access to Anthian Sewer when the player approaches him and Tess at the front of the shop.

A shop that displays and sells numerous valuable stones and gems. This shop offers Gems — one-time use items which can boost a Pokémon's move of the same type, as well as basic Evolutionary Stones, to evolve their Pokémon. Players will also need to go to this place if they wish to buy most of the Mega Stones they need for Mega Evolution after they acquire the Key Stone, though players can still purchase them before obtaining the Key Stone if they want.

This restaurant is located behind Rorian Braviary. Players can purchase a tray of Magik Sushi for 5000 dollars. It may seem very expensive, but players will receive a special fortune cookie afterwards, containing either a random Berry or, rarely, a Prism Scale, which allows players to evolve Feebas into Milotic. Players are advised to save before ordering the Magik Sushi, so they can rejoin immediately to keep their money if the reward is not what they wanted.

A fashion store located in front of New Sushi Stick, it displays unique Rorian and Pokémon related apparel. In addition, players can try on clothing without purchasing, but they will not keep wearing them once they leave the game. The owners are main developers Shipool, who spins the sign outside this store, and Roball1, who is behind the cashier.

Opened by one of the main developers Our_Hero on 9th March, 2017, this shop sells hoverboards, which are interesting takes on the bicycles in the Pokémon franchise, allowing players to travel noticeably faster than sprinting or walking. Basic Boards are free while Deluxe Hoverboards cost 50 Robux per variant, but are even speedier and have a unique style. Players must also visit this store to switch the type of board that they are using.

It is a fairly new shop ran by developer Hoboj03, opened on 19th April, 2017. It features a daily lotto that gives different prizes each day. Similar to how the Pokémon Lottery Corner works in core series games, the lotto scans through the Trainer ID among the player's current party and PC, but it also searches the player's Pokémon deposited in Lagoona Day Care. If any IDs have digits matching the lucky draw, the player gets the prize according to how many digits match. Players can try up to 4 times per day, costing 15 Robux each time he or she draws an additional ticket.

This shop allows players to paint their walls and redecorate their apartments in Housing District with new materials. It is operated by main developer Zombie7737. It was one of the beginning shops here, but only recently opened and sold items on 22nd September, 2017.

Originally named Sixth's Furniture, it is a furniture shop ran by main developer MySixthSense — who also happened to be the Move Deleter in Colosseum Marketplace, though the furniture shop was not ready for service at first. This shop sells furniture for the apartments in Housing District. There are many different styles of furniture, such as Honeycomb, Modern, and Rustic. The furniture itself spans a wide selection, from beds to couches to dressers. The shop is officially opened on 22nd September, 2017 with Developers Johnlitt and Brie_Bee joining the shop as co-owners, thus the shop is renamed as Anthian Furniture.

The following Pokémon can be purchased from a businessman previously saying that he wanted to be alone. He is located in a dead-end behind the THEM Magazine Building. However, this Pokémon is sold for a very high amount of Robux, is always male, and cannot breed. Its special Ability Battle Bond triggers when it defeats an opposing Pokémon, activating the transformation known as Bond Phenomenon. 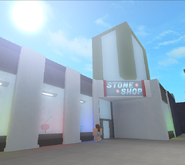 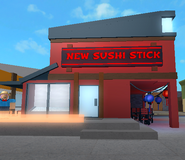 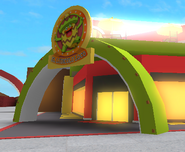 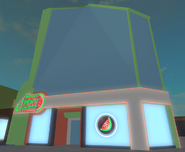 Hobo's Lucky Lotto: a lottery shop ran by developer Hobo.
Add a photo to this gallery

Retrieved from "https://brickbronze.fandom.com/wiki/Anthian_City_-_Shopping_District?oldid=261816"
Community content is available under CC-BY-SA unless otherwise noted.