Pokémon Museum of History is one of the main attractions in Anthian City - Housing District. It is the only museum in Roria so far. Many artefacts including items for Mythical Pokémon, as well as certain Fossils and skeletons, are on exhibition here. Winners and Runner-up artists during the Pokémon Brick Bronze Art Contest 2016 also have their artworks on display in an art gallery on the walls.

A huge skeleton of Lapras serves as the centrepiece of this museum. It is the first and biggest artefact seen inside, taking most of the space on the lower floor. Given how enormous the Lapras skeleton is, a docent points out that Lapras might have been much larger in the past than what Pokémon Trainers witness nowadays.

To the left on the upper floor, many other artefacts can be seen, including some flutes, orbs, stone tablets and most interestingly, some "ancient mechanism with unknown functionality" according to the sign. Those mysterious spherical objects appear to be components of a certain Mythical Pokémon...

Behind the Lapras skeleton, on the middle of the higher floor, the Prison Bottle — which unlocks the true potential of another Mythical Pokémon Hoopa, is stored here. It is found by the player's in-game parents and put here for display according to Uncle Gerald. However, this makes Pokémon Museum of History a target of Team Eclipse's raid...

On the right side of the upper floor, 6 Fossils are on display. They are Claw, Skull, Armour, Dome, Root and Helix Fossils in a top-down order. Players can excavate these Fossils in Lagoona Trenches. 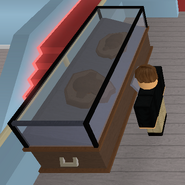 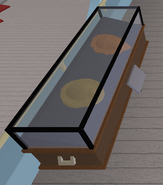 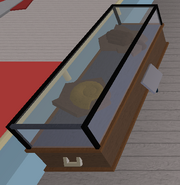 Helix and Root Fossils.
Add a photo to this gallery

A couple of old, grey balls are also found around where the Fossils are on exhibition. A visitor points out that they are actually Poké Balls used 50 years ago.

Pokémon Museum of History also features an art gallery on the walls of the higher floor, displaying the best artworks picked among many talented artists' entries. Before Anthian City opened, Pokémon Art Contest 2016 was held from 4th August to 1st September, 2016. Artists could submit pictures with themselves along with their favourite Pokémon.

After a vote among 11 Game Developers and Moderators, 45 artists were awarded in the vast amount of entries, with 18 receiving second runner-up, another 18 achieving first runner-up and the last 9 announced to be winners. The art of all winners and first runner-up artists are hung on the walls for the exhibition.

The entries of the 9 winners are displayed on the far back, from left to right, in the following order:

The artwork of first runner-up entries are shown on the sides, in the following order when viewed from left to right:

Retrieved from "https://brickbronze.fandom.com/wiki/Pokémon_Museum_of_History?oldid=295231"
Community content is available under CC-BY-SA unless otherwise noted.